How Sigma Six Can Improve Business Practices: A Brief Look at a Case Study 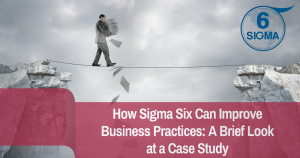 Lean Six Sigma is defined as a set of best practices that will eliminate defects in manufacturing processes. The concept was developed by Motorola in 1986 under the leadership of Bob Galvin. Companies like General Electric, under the leadership of Jack Welch, made the process popular. With Six Sigma, companies can reduce customer dissatisfaction with defective products.

Lean Six Sigma certification is required of advocates in the organization to learn to deliver this level of service. There are three primary levels of Lean 6 Sigma proficiency: Six Sigma black belt, 6 Sigma green belt and Lean 6 Sigma yellow belt. Each has their own set of responsibilities. To fully understand how Sigma Six is used in organizations, case studies are provided to illuminate the core principles of this common business practice.

Dupont Building Innovations. Dupont was challenged to reduce the amount of landfill waste produced within a year. A Lean 6 Sigma black belt employee led the initiative to eliminate the waste with best practices. At the beginning of the process, the company was generating 81 million pounds of waste annually.

The company had to address 15 manufacturing locations and partner locations all over the world. When the Six Sigma methodology was applied, the organization was able to identify the sources of waste generation and why waste was generated at these locations. When the source and reason were determined, an analysis was completed to determine how much could be eliminated or recycled.

By the end of the analysis, experts determined that most of the waste could be reused if it was ground up. This practice prevented the waste from entering the landfill. Scraps could be used as drainage rock. Tyveks was recycled into first-grade material. Sanding waste was saved and used as a filler replacement in concrete. Shipping pallets were repaired and used for animal bedding. The company used cafeteria waste for an energy source and carrier belt film was used to make adhesives.

After a single year, the company had earned $2.2 million from the sale of these byproducts, and the company also saved $400,000. Dupont Building Innovations won a Supplier Sustainability Award for its zero-landfill waste achievement. No capital expenditures were needed to achieve this goal.

This is an example of how Lean Six Sigma helped one company to achieve its goal and improve its processes. The company saved money, earned more money and also became more efficient. This is a prime example of how companies can use Sigma Six and improve.

Companies should ensure that advocates in the company complete effective Lean Sigma Six training. With advocates on the team, companies can improve processes and become more efficient and productive. Just as Dupont had a Lean Six Sigma black belt employee lead the company initiative for waste reduction, other companies can also use Lean 6 Sigma to improve business processes and productivity. All companies should consider how 6 Sigma can help improve their products or services. Great companies such as GE, Motorola and Dupont have proven its efficacy.