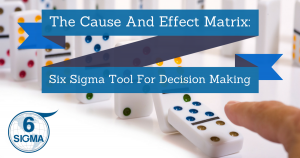 There are many six sigma tool and techniques commonly used to facilitate the Six Sigma process. Whatever phase you are in – Define, Measure, Analyze, Improve or Control (DMAIC) – you have several options to consider.

In this article we will take an in depth look at the Cause and Effect Matrix, just one of the powerful tools used in Six Sigma projects. It is a tool that originated as part of the quality management processes at the Kawasaki shipyards, but over the years has become a mainstay of Six Sigma projects across many industries. It is effective, flexible, and easy to use, making it an extremely valuable part of the Six Sigma arsenal.

About the Cause and Effect Matrix

The cause and effect matrix is commonly used during the Analyze phase of DMAIC and is sometimes called the fishbone diagram. It is primarily used to uncover root causes of an effect, but is also useful for diagramming an organization, showing hierarchies of parts, 5 Whys, and project planning. The cause and effect matrix works very well in situations where the available data is more qualitative than quantitative.

In its principal use, uncovering the root causes of an effect, it is particularly effective at engaging the entire team and thus gathering more complete and comprehensive information. Because it is used in a group brainstorming manner, everyone has an opportunity to contribute and creativity starts to grow exponentially. Teams that use the cause and effect matrix typically experience a real sense of accomplishment and feel as if they are really making progress.

The three basic steps of the cause and effect matrix are:

Be prepared for a freewheeling process that generates a lot of energy and enthusiasm among team members. Ideas and inputs tend to flow fast, so agree in advance to a method of capturing this information that can keep up with the process (we will provide a few ideas a bit later on).

The first step in using the cause and effect matrix is to state the effect you are trying to solve. This is not always as easy as it sounds, though, because there may be some disagreement among the team about the specifics of the effect, and in some cases, the team may decide there are multiple effects to be worked.

The effect should be phrased in the form of a “why” question. Some examples might include:

The entire team must agree on the “why” question before moving on to the next step. This is critical, because if there is disagreement about the specifics of the effect then there will be disagreements about potential root causes.

Everyone on the team should have an opportunity to contribute their thoughts, and everyone must consider the input of dissenting members. Do not allow any opinions to be squashed, dismissed or ignored, because that will inhibit open discussion and lessen the effectiveness of the cause and effect matrix of this six sigma tool.

Brainstorming is a part of this six sigma tool that is usually the most fun for the team. It is an inherently creative process, and when facilitated correctly gives everyone an opportunity to contribute. To get the most out of it, though, there are some ground rules that must be followed:

Once brainstorming gets started, the hardest part for most teams is capturing the ideas fast enough. The group should have a designated facilitator to write down ideas and keep the process going, but one person can rarely write fast enough to keep up with the group so consider selecting two or three people to capture ideas. Some people like to write everything on a white board, but it is a good idea to have a supply of sticky notes close by in case the white board runs out of room. They can also come in handy in the next step, creating categories.

Once brainstorming is finished it is time to sort through the ideas generated and put them into categories. Some Six Sigma practitioners recommend specific categories for certain industries, while others suggest you use the titles of affinity sets if you have used an affinity diagram tool.

Here are two examples of categories that are often used in selected industries:

If these categories work for your needs then great, but if not then feel free to mix and match or create your own unique categories.

Putting it All Together

With the cause and effect matrix complete, the team can then prioritize the key causes. There are a number of ways to winnow down and set priorities, such as voting, assigning rankings of one through five, etc. You should choose the method that works best for your team.

Once you have the priority causes identified, you are ready to move on through the rest of the Analyze phase and into the Improve and Control phases.