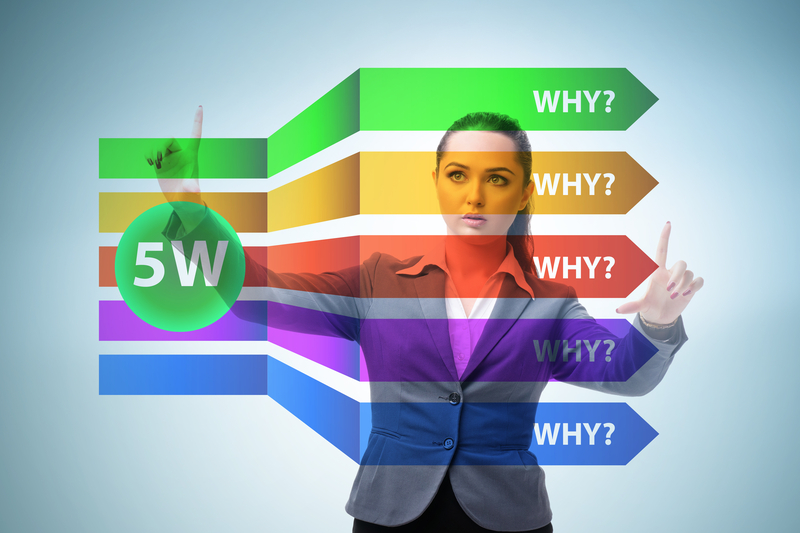 Sometimes, problems can be stubborn and refuse to completely disappear despite trying different things. They just keep coming back in one way or the other. It is at this point that it is important to understand that the reason the problem keeps happening, again and again, is because the underlying issue isn’t resolved.

That is the problem with employing quick fixes instead of long-term solutions – you only fix the problem on a superficial level (mask the symptoms). Worse still, those resources wasted on the quick fix could have been used in identifying and eliminating the root cause of the problem. To prevent this from happening, Six Sigma has root cause analysis (RCA).

RCA brings several tools that teams can use to get rid of a problem indefinitely. One of the most popular tools is known as the 5 Whys. It involves looking at the problem and asking “Why?” five times until the root cause is identified.

In this post, we are going to outline how organizations can implement this tool.

A big part of successful implementing 5 Whys is understanding the issue and then making changes to eliminate it once and for all. Many teams who have used the tool have been surprised to find that the cause of the problem is something they didn’t expect. This speaks to the true power of the 5 Whys since underlying causes are not always obvious.

Here are the steps to implement it:

Put Together a Team

When assembling the team, make sure it has people who have been directly affected by the problem. If not, make sure they at least noticed it. A team leader should be selected who will be in charge of the meetings and delegating responsibilities to team members.

Since the problem has already been identified, the team should focus on coming up with a problem statement. It should be clear, concise and agreed upon by everyone in the team.

Here, the team leader should start asking “Why?” and team members should contribute. Their contributions should be fact-based and data-backed. Keep in mind that it is not a hard rule to ask why five times. The team leader can ask it until the root cause is identified, even if it is less or more than five times.

With the root cause identified, the team then moves on to suggest, agree on and implement effective changes that will make the problem go away and never happen again.

The changes need to be monitored to ensure they have effectively eliminated the problem. If not, improvements need to be made – they can also be replaced. The team shouldn’t be afraid to go back to the drawing board and ask “Why?” again in case they identified the wrong underlying cause.

When facing a problem that refuses to go away, Six Sigma can help. Specifically, it can help organizations identify the root cause of the problem using tools like the 5 Whys. Only by getting rid of the underlying cause can you rest assured the problem has been dealt with and will not be a recurrent issue.

Learn more about our training and courses