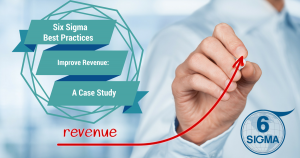 Six Sigma was developed in 1986 by Motorola and later, gained popularity with companies when Jack Welch implemented the business practices in General Electric. These best practices will reduce the number of defective products produced by companies and improve the efficiency of business practices. Six Sigma has increased the revenue of many companies.

Here is one case study example that can help companies learn how Six Sigma best practice can be applied:

One unnamed cellular service provider was experiencing a problem with their DMAIC process and online top-up system. The service provider was also experiencing low registration rates and top-up rates. Before Six Sigma was implemented, the registration success rate was approximately 80 percent, and the top-up success rates was approximately 60 percent.

The customer service center did not operate efficiently. The company invested a significant amount of time and money into the company because of the inefficiencies. The company found that many customers switched to providers with efficient online top-up systems.

A team worked together to increase and improve registration rates. Hypothesis tests were conducted to find significance. The Chi-Squared test is commonly used for this purpose. Studies showed factors that traditionally do not have an effect on output actually had a strong correlation. Without conducting this test, the company would have never revealed this information. This information indicated to the Six Sigma Black Belts that there was an inconsistency in the current system that should be modified for improved efficiency.

New rules were created to follow logical decisions regarding accepting and rejecting a simple transaction. The criteria for defining a fraudulent transaction were updated. IP addresses were reviewed to determine which were blacklisted and how to prevent the common practice.